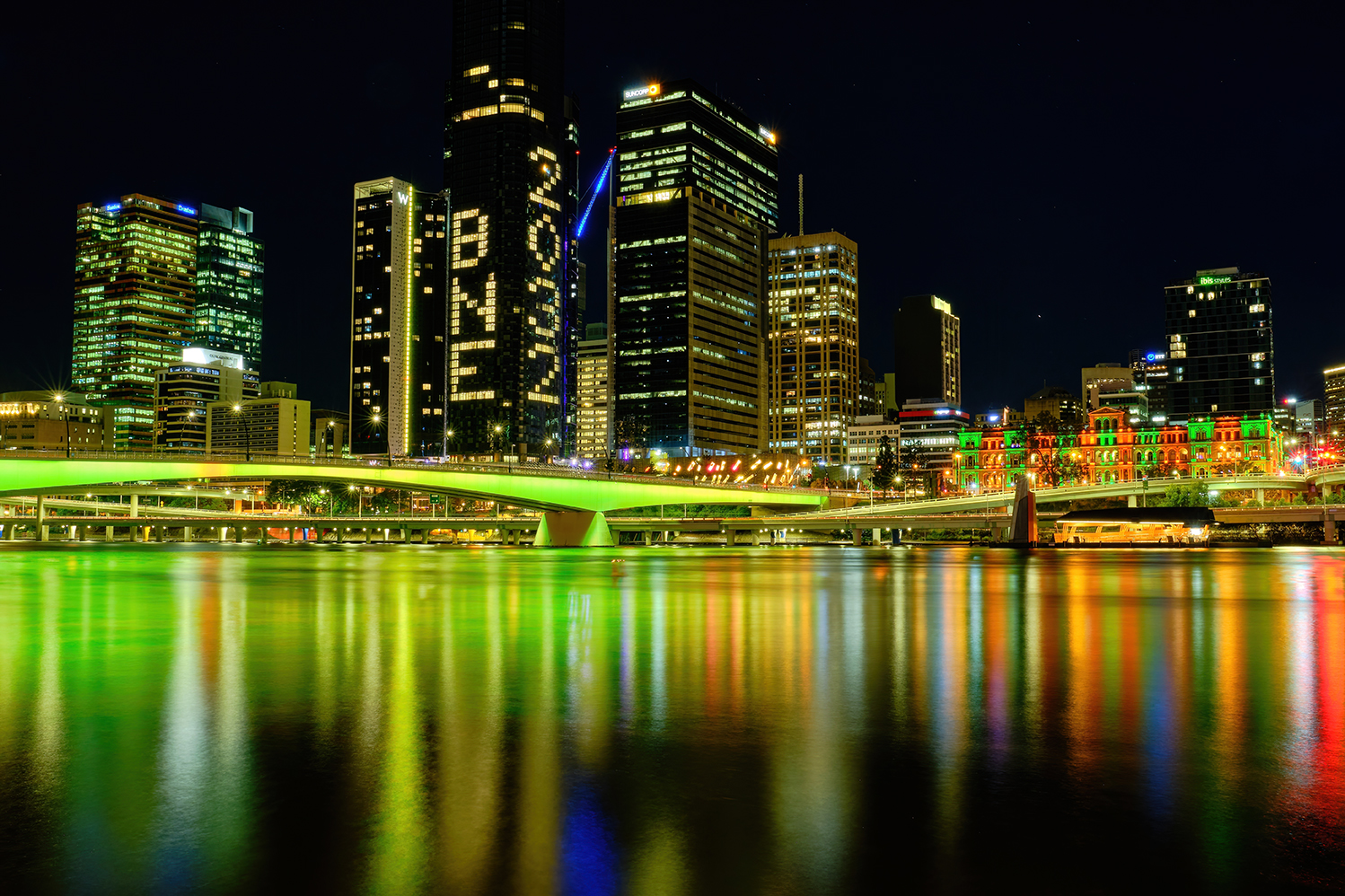 The Committee for Brisbane records its praise for the tireless efforts over many months of elected officials and public servants in the Federal Government, Queensland Government, Brisbane City Council and the Council of Mayors (South East Queensland) in securing the 2032 Olympic and Paralympic Games for Brisbane and the south east.

The International Olympic Committee’s acceptance of the Brisbane 2032 candidature will see the city, region and State join a select global group.

Every one of those cities is recognised around the world – they will forever be Olympic and Paralympic cities – and now it’s Brisbane’s turn to join that global pantheon.

We thank Australian Olympic Committee President John Coates AC for his advice and support for the Brisbane candidature and praise the efforts of the Australian Prime Minister, Queensland Premier, Brisbane Lord Mayor, other SEQ Mayors and their staffs to achieve this once-in-a-generation opportunity.

Our strong support for the 2032 candidature was an easy decision for the Committee for Brisbane, whose Vision is for greater Brisbane to be the world’s most liveable place, because the opportunities presented through the privilege of hosting the Olympic and Paralympic Games are reflected in that Vision.

For more than 18 months, up to 120 Committee for Brisbane members – companies, organisations and individuals – have been developing a suite of Olympics and Paralympics legacies for SEQ.

We have been working to identify the challenges and opportunities for south east Queensland, and how the community could benefit from the activity, attention and accelerated investment associated with the Games.

This wonderful honour is not just about a few weeks in 2032 when we host the Olympics and Paralympics, this is about the 11 years leading up to 2032 and the decade beyond; it’s about ‘what’s in it for us?’

The Committee has identified opportunities that could and should be achieved through the preparations for and hosting of the Games – in road and rail connectivity, mobility, regional data and digital competency, First Nations recognition and inclusivity and enterprise, health and well-being, including mental health, investments in arts and culture, environmental standards, support for new enterprises and more.

Although our legacy proposals focus on greater Brisbane and south east Queensland, the ideas and aspirations we have presented are relevant for the whole state and easily transferable.

We believe that all of Queensland should benefit from our hosting of the Olympic and Paralympic Games. 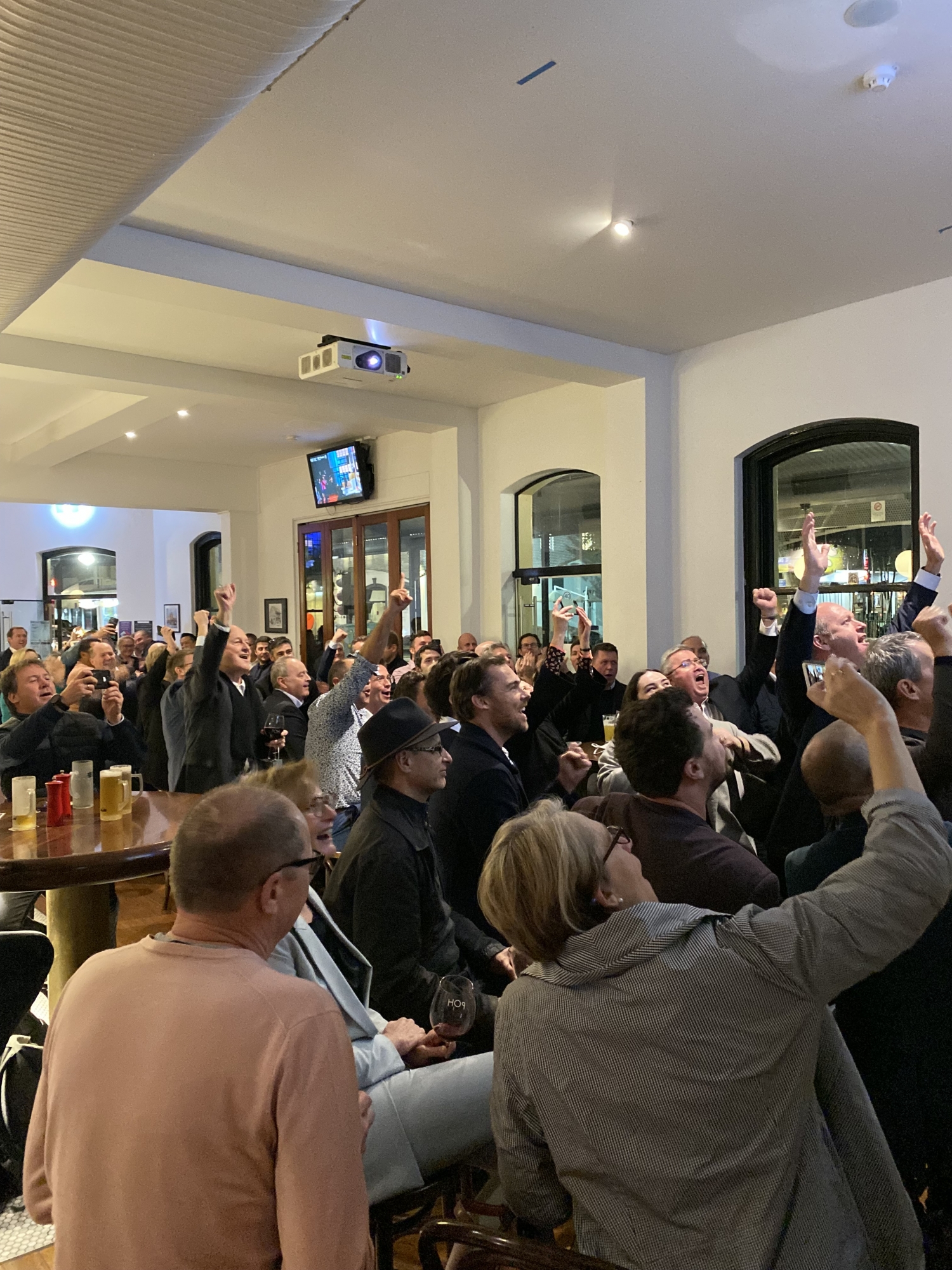 More than 50 Committee for Brisbane Members celebrated – in true Aussie style – the 2032 Olympics and Paralympics announcement at an informal gathering at the Port Office Hotel (thank you Nick Gregorski for accommodating us).

For an impromptu get-together, the night was a smashing success.

Brisbane Who are you? 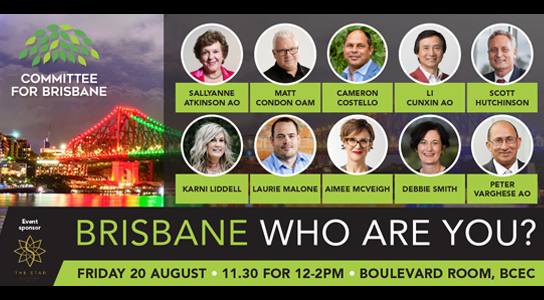 With the 2032 Olympic and Paralympic Games secured for Brisbane, it has never been more important for the city to understand its strengths and weaknesses and find an identify/a narrative that the whole community can own and proudly present to the world.

At a recent strategic planning session of the Management Committee, the number one item identified for action was a Brisbane identity.

The Committee proposes to work with its 200+ Members and Affiliates – which collectively represent most sectors of our community and economy – to start a discussion about a modern Brisbane identity, and then work more broadly with the community to (hopefully) find a narrative that is widely supported.

“Brisbane: who are you?” is a public event on Friday 20 August at the Brisbane Convention and Exhibition that will involve a panel of 10 industry sector experts/community leaders who will each be asked to speak for a few minutes about what Brisbane means to them and then join in a panel discussion:

The motivation behind this event was borne, in part, from discussions with the Department of Tourism, Innovation and Sport that, in collaboration with Brisbane Economic Development Agency, has been considering city identity.

With encouragement from the Department, and Tourism and Events Queensland, we offered to pull together this event to start a broader conversation about city identify.

This should be a fascinating and stimulating discussion.  Purchase your tickets here.

What could be our Olympic and Paralympic Opportunities? 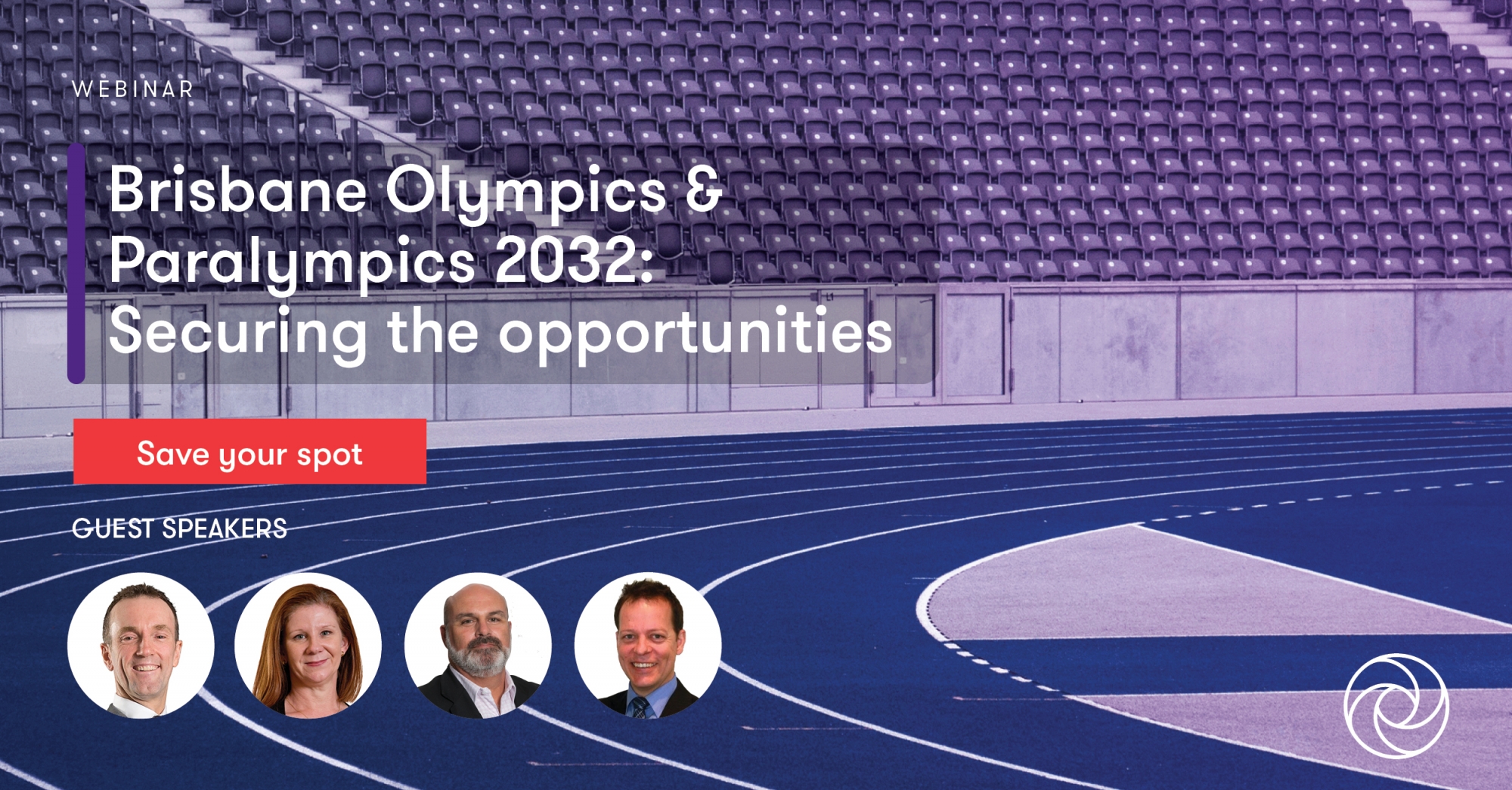 Committee for Brisbane CEO Barton Green will join Council of Mayors (South East Queensland) CEO Scott Smith in a webinar on 17 August to talk about the opportunities for our region and State from hosting the 2032 Games.

The webinar is being hosted by Grant Thornton (a CFB Corporate Member) and will be facilitated by Paul Banister, Head of Tax in Brisbane, and Sian Sinclair, National Head of Real Estate and Construction.

The webinar, that will run from noon-1pm on Tuesday 17 August, is free and you can register here: https://www.grantthornton.com.au/insights/webinars/brisbane-olympics–paralympics-2032

Can we achieve a circular economy ecosystem in South East Queensland?

Are the 2032 Olympics and Paralympics an opportunity for a circular economy ecosystem? asks Andrew McEwan, Director, Infrastructure Advisory at Aurecon (a CFB Corporate Leader member).

With a focus on 2032 being a zero waste Olympics and Paralympics, we must start thinking differently about how we design and implement planning and delivery.

Circular economy principles provide an opportunity to not only deliver a zero waste Olympics and Paralympics but create a circular economy legacy that positions the south east Queensland region for a more sustainable future.

The generally accepted principles of a circular economy are based on designing out waste and pollution, keeping products and materials in use and regenerating natural systems.

The Tokyo Olympics aims to introduce a circular economy approach through measures such as 100 per cent renewable energy for the Games, use of hydrogen energy to fuel vehicles, cauldrons and torches, a focus on reducing CO2 emissions and promotion of the 3Rs concept (reduce, reuse, recycle).

One of the main concerns about the Olympics is what happens to the assets and initiatives, such as creating a circular economy ecosystem, after the Games are completed. How can we leverage these investments by using the principles of the circular economy?

For example, initiatives that could be considered include investing in manufacturing industries that produce building products, such as green ceramics for floor tiles and furniture in the athletes villages, that would help create a lasting circular economy legacy; or ensuring water businesses are considering circular economy investments such as the use of wastewater for hydrogen production as part of forward capital programs.

To improve on the recent Olympics’ approaches and to ensure a demonstrable shift from current state to the achievement of a circular economy ecosystem legacy through the planning, design and delivery stages, a leadership-based approach should be taken with strong governance across the three levels of government.

Leveraging opportunities such as managing the reuse of food waste for the up to 14 million meals served at the Games will need a coordinated and sustained approach by government to ensure a lasting legacy is provided to the region.

This coordinated approach will help lead an improvement of assessment of opportunities, drive and embed transformation and ensure measurement of benefits is undertaken.

This governance model will also ensure circular economy principles are designed, embedded and implemented throughout the key stages: planning, design and investment decision-making, including business cases; procurement and construction; Games delivery and operations; and post-Games legacy. 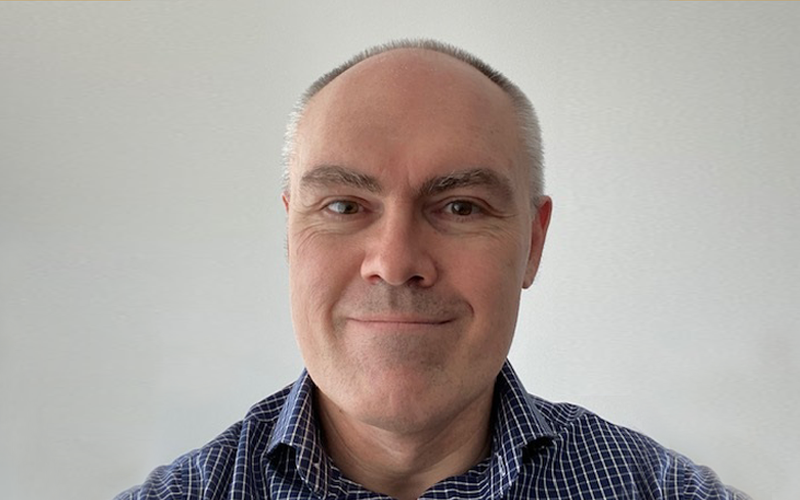 The Committee for Brisbane is delighted to welcome Julian Page as its new Policy and Research Manager.

Julian started with the Committee in mid-July and is responsible for leading our policy and research functions, with the primary role of providing the research discipline to underpin policy and advocacy.

He comes to the Committee from the State Government, where he was most recently a Principal Policy Officer for the Department of Seniors, Disability Services and Aboriginal and Torres Strait Islander Partnerships (DSDSATSIP).

More broadly, his experience includes the development and delivery of a range of marketing strategies, industry analyses, and reporting on community attitudes to development proposals.

He held a previous role with Invest Australia (the former Australian Government agency) where he developed and delivered a strategy focused on the attraction of investment and collaboration opportunities from the Japanese biotechnology market.

Julian is already working with two new Committee Taskforces: a group preparing the Committee’s submission on the BCC Industrial Strategy Review, and the 2050 SEQ Integrated Transport and Mobility Vision Taskforce.

Next phase in the SEQ Smart Region project

Following the June launch of the Committee’s paper “SEQ: Australia’s First Data Community”, Members received an insightful briefing from our colleague Merrick Spain from Civic Analytica about ways to drive the project forward.

In late July, about 20 Members from the business and university sectors met to hear from Merrick and discuss opportunities to progress the five ideas/projects set out in the Committee’s South East Queensland – Australia’s First Data Community – Paper 02-2021

Interest was high and we were delighted to have Queensland‘s Chief Customer and Digital Officer, Chris Fechner, in the room as we explored opportunities for the Committee to support some of the State’s Smart City/Region objectives.

We propose to reconvene (and expand) the Committee’s Smart Region Taskforce with a view to progressing one or more projects. Watch this space.

Lunch with the Opposition Leader 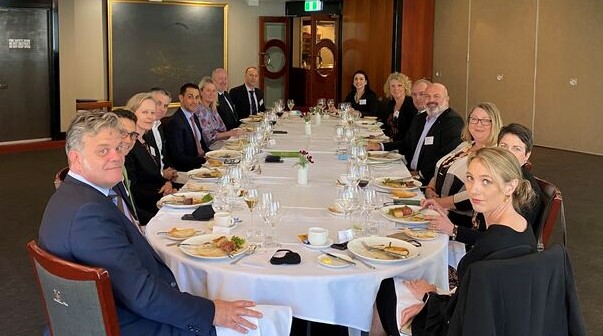 The Committee met with David Crisafulli MP, Leader of the Opposition and Shadow Minister for Tourism, in July to present our recent thought leadership ideas generated by our most senior members.

From good to great – economic, environmental and social opportunities for south east Queensland (2021)

We appreciated a candid discussion in which Mr Crisafulli outlined his plans for party reform (which were subsequently approved by the LNP a few days later) and his Vision for the State.

We agreed that more targeted industry engagement between Shadow Cabinet and Committee Members would be beneficial and we look forward to ongoing interaction.