In partnership with Corporate Leader member BDO, the Committee for Brisbane (CFB) is one step closer to establishing an innovation ecosystem for greater Brisbane.

On 13 July, BDO and CFB will host an “Innovators and Entrepreneurs Boardroom Lunch” to discuss the challenges and opportunities for successful innovation-based businesses in greater Brisbane and consider the possibilities for our region in 2032 and beyond.

CFB and BDO are looking to auspice a monthly “open door” network for business and industry, higher education, government and entrepreneurs to meet and exchange ideas and information as part of an innovation ecosystem.

The project has been a few months in development, after the Committee accepted a challenge set by Dr Sarah Pearson, the keynote speaker at our February event “Building a greater Brisbane innovation ecosystem”.

Dr Pearson, who will be a guest at the invitation-only lunch, has helped to establish innovation ecosystems in Australia and the Pacific.

The Committee’s interest in the topic is a combination of its charter to pursue the jobs and industries of the future as well as a commitment to improving engagement with a younger cohort of business people.

It's time for TV to leave the Mountain

Mt Coot-tha’s TV towers have provided an iconic backdrop to Brisbane for almost 60 years, but it is time those towers and the stations below them were taken off the mountain.

When television began in Brisbane, Channels 7, 9 and 10 were each granted land for their stations in the form of 99-year leases. Each cleared their sites and built large studios and offices.

But changes to the industry have seen the end of most local production and those buildings are no longer fit for purpose. They are tired and expensive to maintain and, from a technical point of view, the stations do not need to be there.

Channel Nine would happily leave the mountain and hand its lease back. I believe 7 and 10 would do the same.

The 2032 Olympics and Paralympics will require a state-of-the-art media centre to be created in Brisbane that will house about 25,000 media representatives. Bowen Hills, already home to News Corporation, is one possible site.

A legacy might be that the television stations move permanently as anchor tenants into that centre.

Mt Coot-tha is among Brisbane’s greatest assets – 1600 hectares of bushland that is a hugely popular place for recreation. The TV station sites, with panoramic views across the city and with an established development footprint, are perfect for tourism investment that leverages our beautiful bushland.

The opportunity to enhance the range and quality of the Mt Coot-tha experience for the city’s residents and visitors ahead of the Olympic Games is not to be missed. 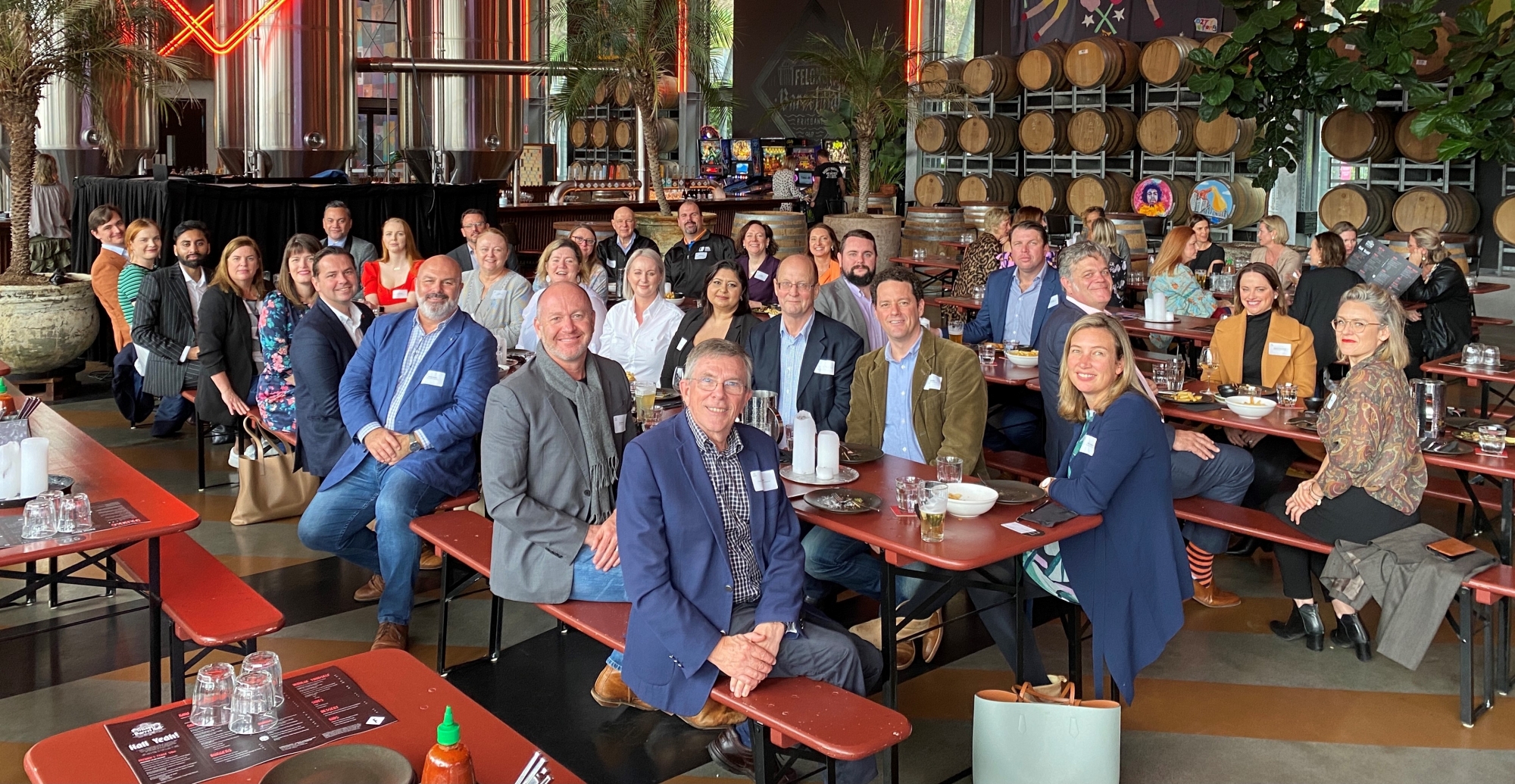 More than 30 Affiliates and friends got together for a social afternoon in late June (just days before the most recent lockdown, thankfully).

The Committee for Brisbane has over 40 Affiliates, representing a wide range of industry bodies, charities and not-for-profits across a number of economic and community sectors, including arts and culture, social welfare, disability services, infrastructure, manufacturing, construction and property development.

The Affiliates and Friends gathering was held at Howard Smith Wharves, a CFB Enterprise Member, and provided an opportunity for CEOs, Directors and others to mingle and share stories and experiences.

Pleasingly, several new alliances were under development by the end of the catch-up. 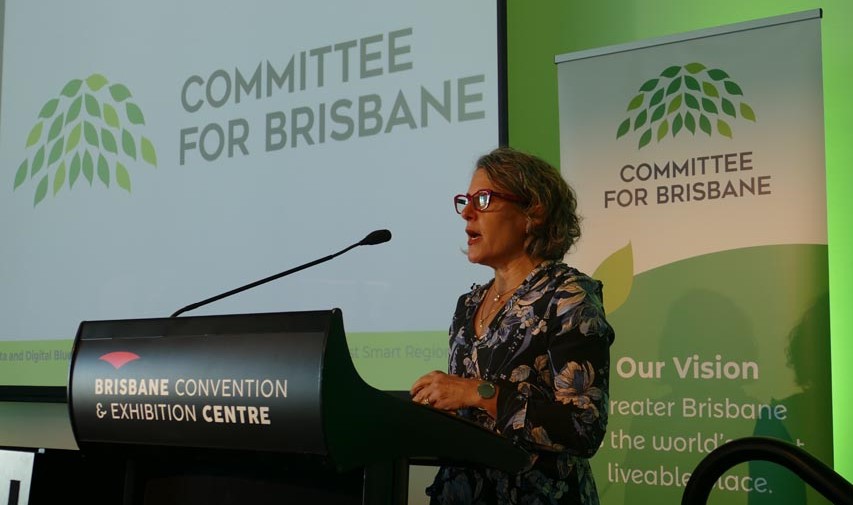 The paper outlines the actions that can catapult SEQ into a future built on evidence-based decision making, better use of public funding and a more responsive way of building and creating cities.

Romilly told the audience that she was a “big believer in the value in bringing leaders from across government, industry and academia together in forums such as this”.

“There is so much more that can be achieved for our communities when we collaborate and leverage our collective skills, resources and expertise,” she said.

“This is particularly true when it comes to data and digitalisation, where there is so much value in ensuring different systems and processes are able to talk to one another.

“At the recent 2021 Global Infrastructure Initiative Summit in May, they outlined some of the best ideas from the summit including ‘engage owners in technology adoption and move from experience-based to data-driven decision making.’”

“Digital connectivity is producing more data than ever before. But to harness the transformative potential of data and digitalisation – and its ability to maintain and enhance the liveability of our cities and regions – we do need to take concerted action.

“While innovation is continual, it is not necessarily coordinated, standardised or clearly regulated.

“Alignment and enablement across government can help Australia, and major growth regions like south east Queensland, to realise major economic and community benefits.

“This is the central premise that underpins Committee for Brisbane’s proposal for the region to become Australia’s First Data Community. It is also a guiding principle of Infrastructure Australia’s reform and investment advice as we look to support the national COVID-19 recovery.”

Thank you to our event sponsor: 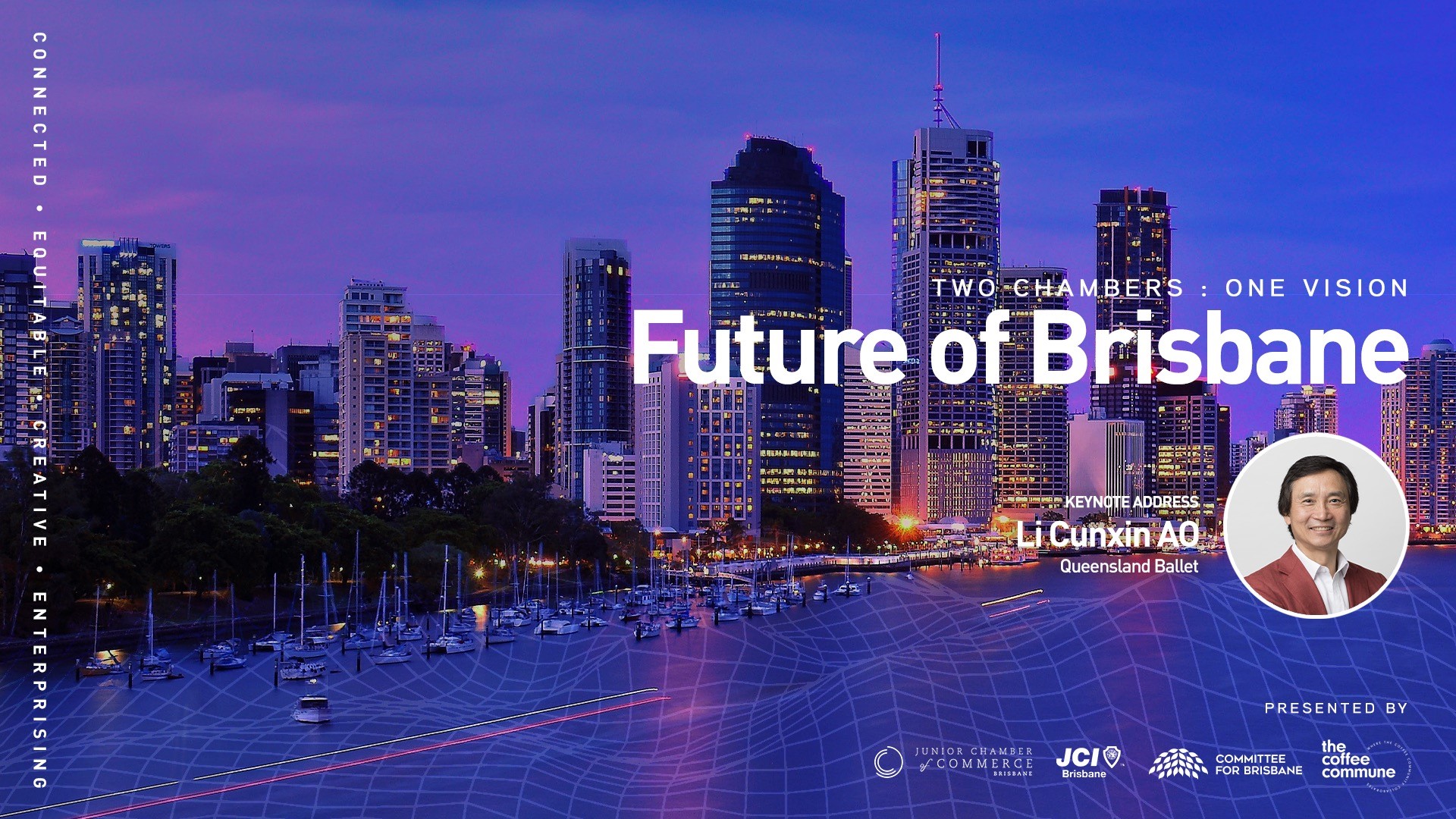 “Two Chambers, One Vision” will be a panel discussion at The Coffee Commune at Bowen Hills on the evening of 3 August, to consider: If Brisbane is declared host of the 2032 Olympic and Paralympic Summer Games, the city and SEQ region need to be ambitious and bold for the legacies that can be derived.

The junior chambers have secured as keynote speaker Li Cunxin AO, Artistic Director of Queensland Ballet and a member of the CFB Advisory Council.

Li will be joined on a panel by Amanda Mather, CEO of the Sporting Wheelies and Disabled Association; Phillip Di Bella, CEO of The Coffee Commune; and John Lee, Acting Director-General, Queensland Department of Tourism.

In the lead up to the JCI Congress in Brisbane in October 2021, this panel event aims to engage with greater Brisbane’s future leaders to hear their thoughts and ideas on what the Olympics and Paralympics legacies might be.

The Committee for Brisbane is a partner for this important event and we look forward to hearing the outcomes. Tickets are available here: https://booking.safevisit.com.au/3934m