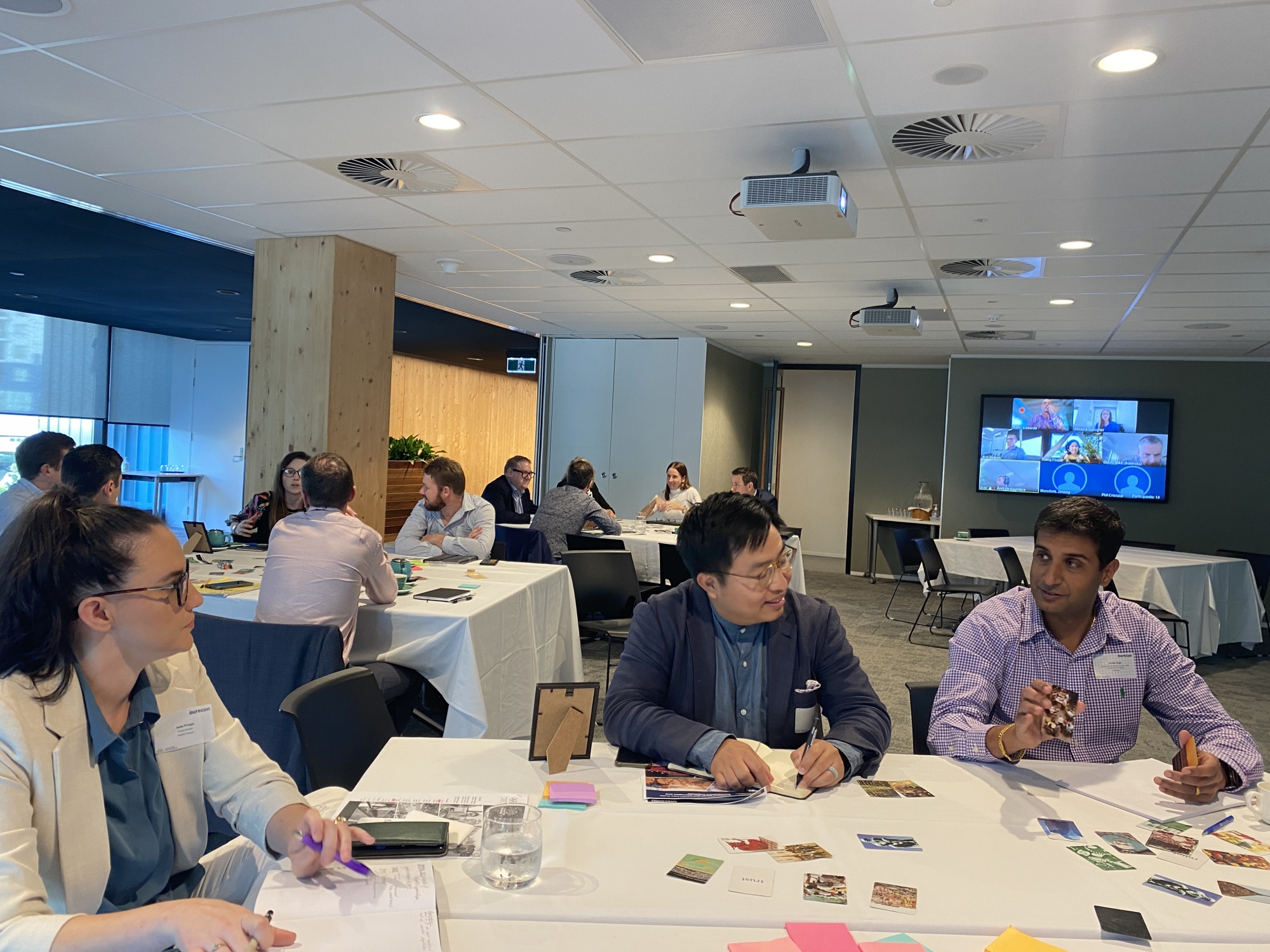 More than 100 individuals, representing over 60 Member companies, organisations and Affiliates, are working on the important Phase Two of the Brisbane 2033: Our Olympics and Paralympics Legacies project.

The Committee is grateful to Members Accenture, Aurecon, Deloitte and PwC who are each project managing the development of the strategic frameworks and timelines for one of the project’s four legacy themes: connectivity, creativity, equity and enterprise.

Over late April and early May, the project managers facilitated start-up meetings with the individuals who have offered their time and expertise under one or more theme, and sought nominations to work in smaller teams on the 20 SMART Goals in the legacy paper.

Phase Two is scheduled to be completed by the end of the financial year, just in time (hopefully) to learn that Brisbane will be nominated as the host city for the 2032 Olympic and Paralympic Games.

The Committee’s intent is to then provide the strategic frameworks and timelines for our 20 SMART Goals to the Federal and State Governments, Council of Mayors (South East Queensland) and the Australian Olympic Committee and commence discussions about implementation.

Briefing from Shadow Federal Minister for Cities and Urban Infrastructure 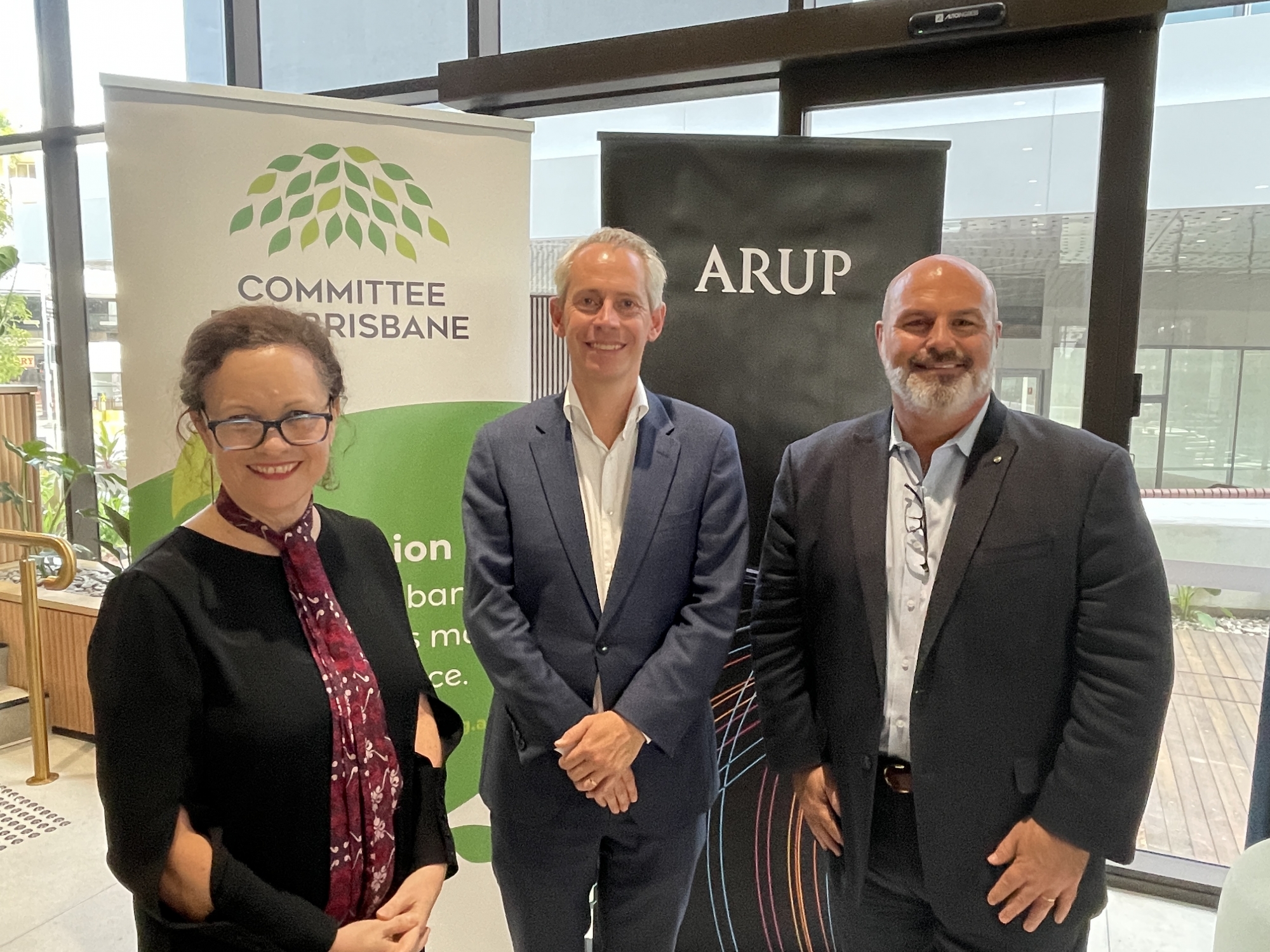 Our thanks to Arup for hosting the private briefing.

More than 30 Members heard from Mr Giles about city and region building, and were particularly interested to learn about the federal ALP’s commitment to the City Deal process and structure.

Mr Giles explained that, if elected, Labor would implement six measures to recreate cities policy, in the wake of the pandemic and the recession:

Mr Giles said: “Our policy is designed to be a joined-up framework for our recovery, a framework for enduring partnerships with the different levels of government and with the private sector”.

“We will honour existing City Deals – and expand on them by transforming them into genuine City Partnerships.” 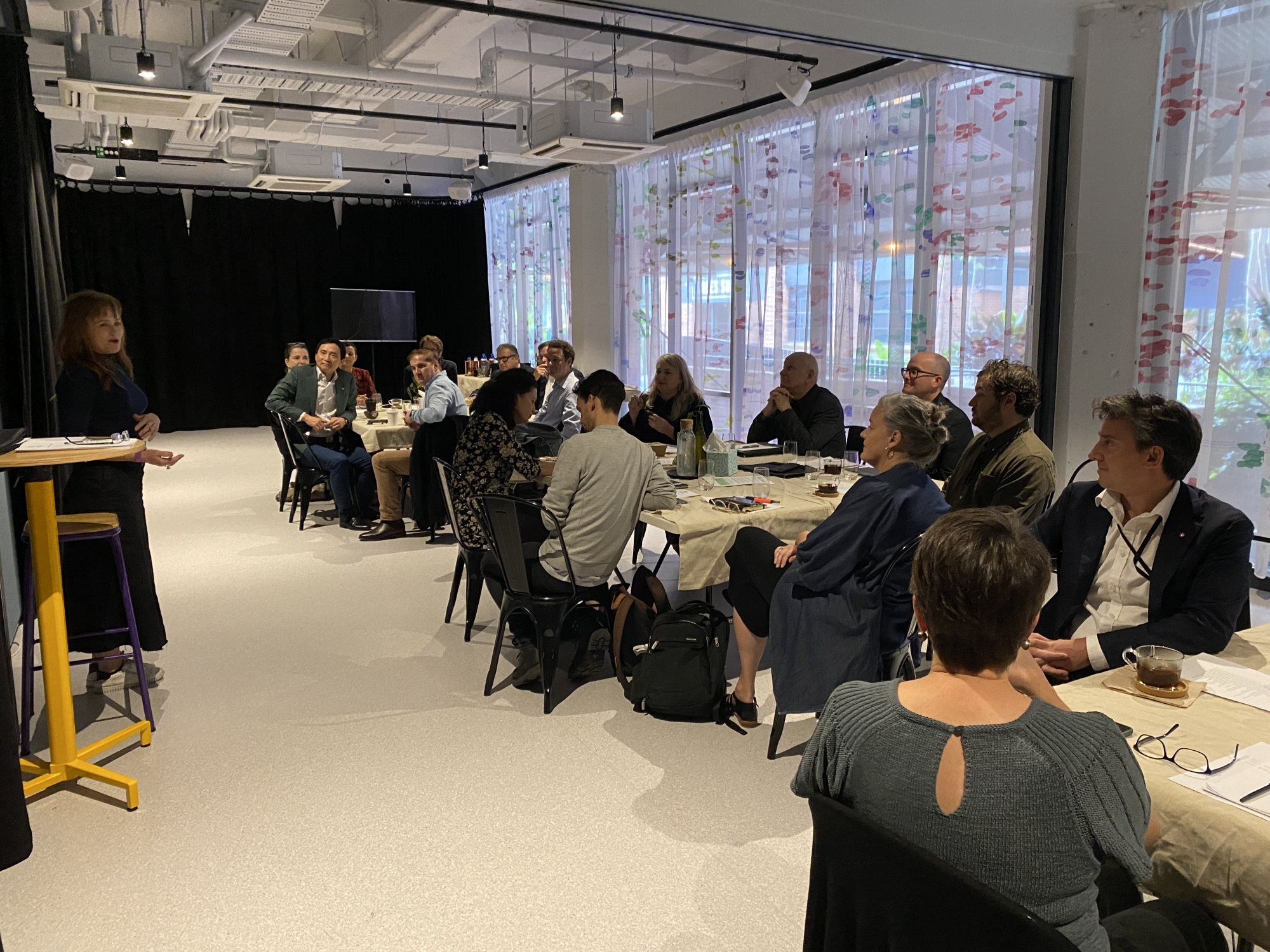 More than 25 leaders from the Brisbane and Queensland creative sector came together recently at a Committee workshop, held at Metro Arts, to re-launch a project to develop a Creative Brisbane Vision.

The Committee started the project in 2020, but had to postpone activity as a result of the pandemic.

The project’s intent is to look for a way to capture and describe an ambitious agenda for the broad creative sector that could be used to collectively engage with politicians, business and the community – by promoting and prosecuting a strong narrative on our creative strengths as a city and region.

Attendees at the Creative Brisbane Vision re-start workshop strongly endorsed the proposal, and a small Steering Committee was nominated to progress the project, before undertaking a wider consultation process in a few weeks.

A call for consistency from governments

The Committees for Cities and Regions Australia and New-Zealand network has renewed its call for a consistent and collaborative approach across local, state and national jurisdictions to help cities and regions return to vibrant and safe places.

In April, the bi-annual Committee for Cities and Regions meeting, conducted on-line, acknowledged that while Australia and New Zealand have done better than most in managing the COVID-19 health crisis, the pandemic had greatly tested our economic resilience and competitiveness.

In a joint statement, the network said our trade exposed industries were particularly challenged as a result of the international health crisis severely curtailing critical export earners such as international education and the visitor economy.

“COVID-19 has deepened the geo-political instabilities and the tensions with Australia’s largest export destination, China. Jurisdictions must work together to diversify our international export markets,” the statement said.

“COVID-19 has thrown into sharp focus the importance of structural reforms to underpin sustained economic recovery in priority physical and social infrastructure sectors.

“These include the creation of a renewable and circular economy, social and affordable housing, optimal population distribution and growth, skilled migration to support innovation and the economy, diversification of export markets and better coordination between cities and regions.

The Committees for Cities and Regions Network six priority areas for attention are:

Affordable housing for key workers will be particularly important to foster stability, innovation and a start-up economy as well as the essential services sector.

It is not acceptable that people are being pushed further from where they work, with the community, health and mental health problems that arise from this.

State and Federal governments should make use of a suite of local, state and federal planning and taxation tools, built on reliable data, to address this problem.

It will also require public investment to increase social housing stock to catch up to demand.

The Visitor Economy represents a significant proportion of GDP through its contribution to jobs and spending in areas like events, hospitality and accommodation.

In Australia, the visitor economy represented a significant 3.1% of national GDP prior to the collapse arising from COVID-19.

The fall in Visitor Economy GDP is much worse than for the rest of the economy and we are slowing down recovery in the sector by inconsistent approaches to borders, quarantine, tracking and tracing.

Both national governments’ tourism support packages must target cities and regions jointly, as gateways to one another, to increase visits and length of stay.

We welcome the creation of the ANZ travel bubble and look forward to building on this bubble with other jurisdictions which have successfully managed the pandemic, such as Singapore, Taiwan and the South Pacific region.

To remain competitive and save jobs and knowledge, we need to bring international students back at scale, quickly and efficiently.

Competitors in the US, UK and Canada, where the COVID situation is much worse, are already taking away our market share, with long term consequences.

If ever there was a case for a joint approach by our national, state and local governments to make this happen, now is the time.

International education is both Australia and New Zealand’s fourth largest export. It is estimated to support 250,000 jobs in Australia.

International education brings skills and investment with enormous benefits for our economy, our community and our health.

60% of the economic contribution from international education comes from students and their families spending money in Australia on housing, food, transport and tourism.

We need to build community support for the idea that state of the art quarantine and tracking and tracing can bring 40,000 Australians home and bring back international (and domestic) students at scale.

Australia is currently one of the safest and most secure places to live and do business in a COVID world.

To take advantage of this opportunity and help build a more resilient and competitive Australia and New Zealand, we must accelerate our skilled and business migration programs.

Population distribution policy can leverage the post COVID-19 trend for migration from our largest cities, take the pressure off large urban centres, and support distribution to more medium-sized cities and regional areas.

Integrated settlement and transport planning can better connect the cities to regions, to the greater mutual benefit of cities and regions.

A renewable energy strategy for a circular economy is within our sights.

Local jurisdictions are leading the way, with old-energy cities and regions already developing plans for transitions to clean energy infrastructure and jobs.

A whole of government approach, taking into account global activity, will turbo charge opportunities and ensure our jurisdictions become world leaders in clean energy technologies while supporting our manufacturing sector.

A consistent approach to borders, quarantine, tracking and tracing is vital to our economic recovery and international competitiveness as we emerge from the health crisis.

Fridays in the city - let's get back to town! 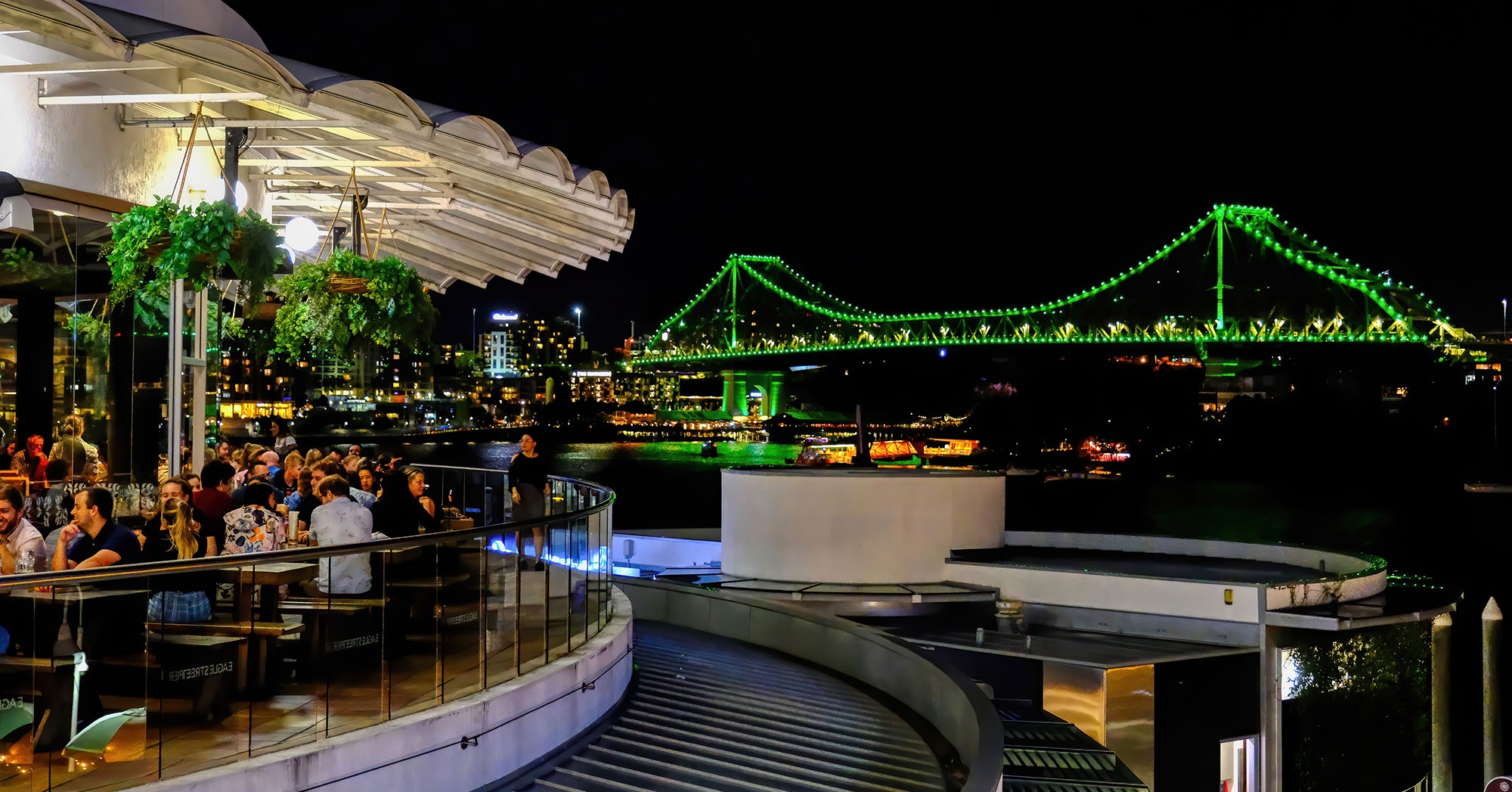 The Property Council of Australia (PCA), a  Committee for Brisbane Affiliate, and Brisbane City Council are seeking our help to ensure Fridays in the city are a day not to be missed.

As anyone who has recently been in the city during the working week would know, there are now less people around on Fridays than on other days of the week.

The PCA has announced “Friday in the City” – a joint initiative with Brisbane City Council and CBD stakeholders to reawaken Brisbane’s city centre on a Friday. The campaign will run from 21 May to 25 June.

The pandemic’s impact on the Brisbane CBD has been profound.

The students, tourists and business travellers that normally contribute to the buzz in the CBD are now absent, and various data sources are pointing to the fact that white collar workers are choosing to work from home in large numbers on Mondays and Fridays.

To attract workers back to the CBD on Fridays – which is now the quietest day of the week – building owners and managers are planning a program of activities and incentives to engage their customers throughout the six-week campaign.

Brisbane City Council and Brisbane Economic Development Agency (BEDA) will curate a program of free activities in public spaces at various times throughout the day and night.

BEDA will support the campaign through a dedicated website, profiling the individual promotions of asset owners and managers, as well as providing a suite of marketing collateral for use by campaign participants.

The Committee hits the road 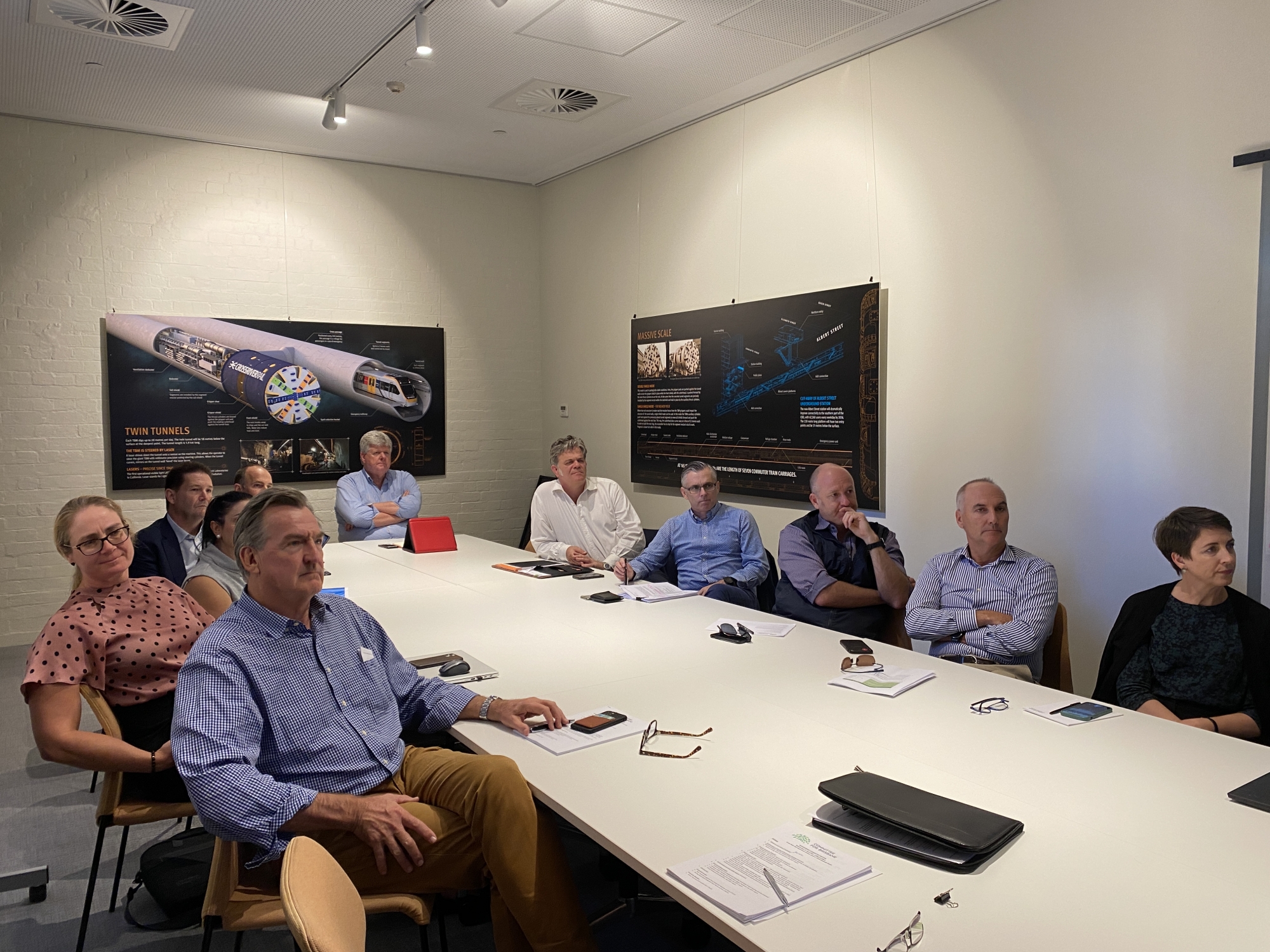 The Committee’s elected officials were on the road recently, conducting site visits of the enormous Springfield development west of Brisbane in March and the Cross River Rail Albert Street development site in April.

The March tour was organised with the support of Advisory Council Member, Raynuha Sinnathamby, Managing Director of Springfield City Group.

The Management Committee enjoyed a bus tour of the Springfield development, inspecting completed residential, commercial, health and education precincts and also looking over future development sites – including the new training facility for the Brisbane Lions AFL club (a Committee for Brisbane Member).

The Management Committee then had a fascinating brief from SCG about its Zero Net Energy Vision – an ambitious project, in partnership with Engie, with a goal that by 2038 the six suburbs that make up the Greater Springfield community will be generating more energy than they consume.

In April, the Management Committee took a bird’s-eye view into the deepening cavity on Albert Street that will house one of the underground stations for Cross River Rail, and then moved to the impressive Experience Centre across the road for an update briefing on the project.

Our thanks to Cross River Rail Development Authority (CRRDA) Executive Director, Marketing and Communications, Russell Vine and his team for coordinating the visit and sharing some of the project details with the Committee.

CRRDA is a Member of the Committee for Brisbane and we will be visiting again in June when the Advisory Council holds its quarterly meeting in the Experience Centre and receives an update from CRRDA CEO Graeme Newton. 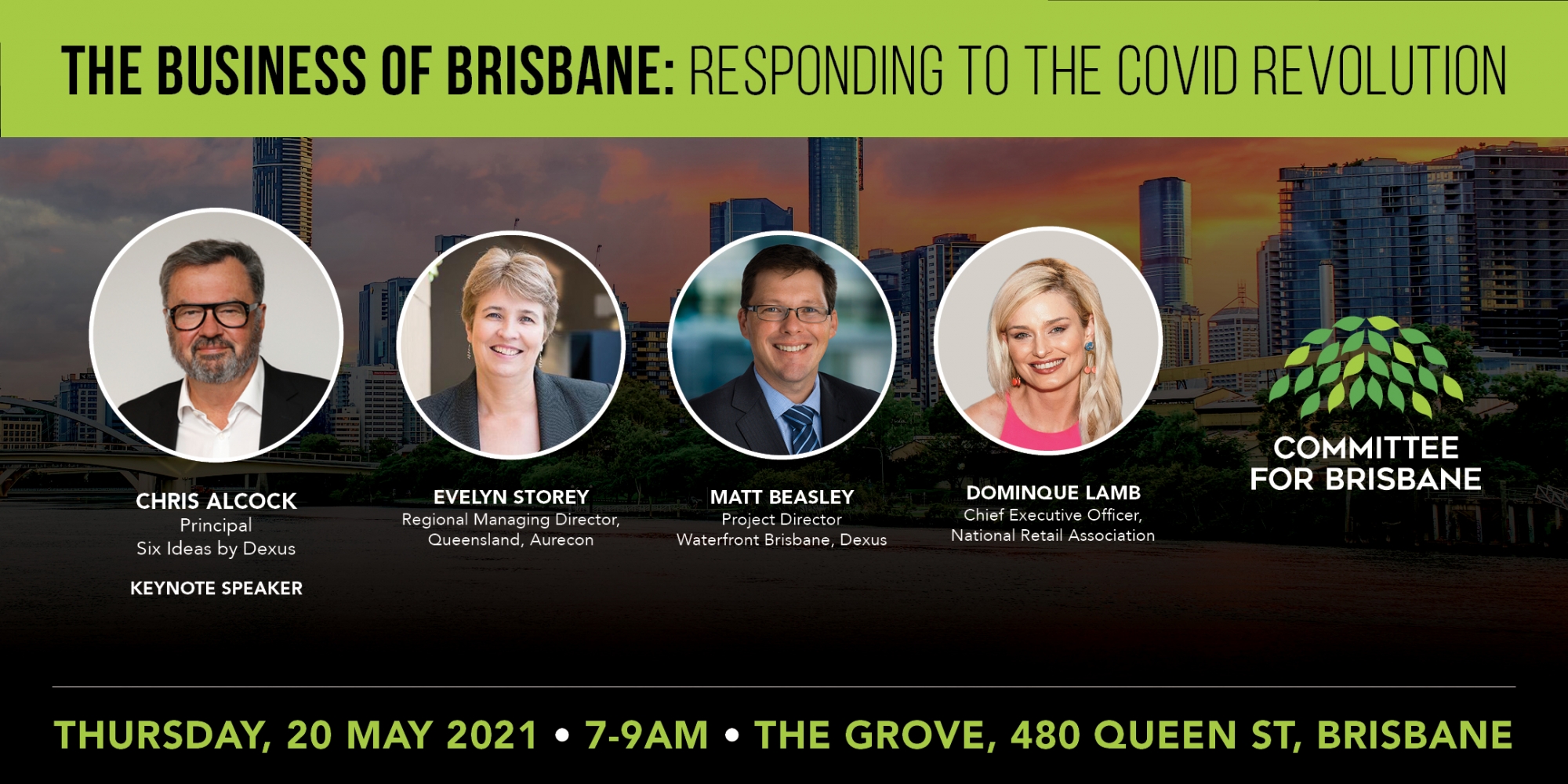 If you’d like an insight in what your workplace might look like in the future, and how you and your colleagues might work together (or apart), come along to our next event on Thursday 20 May.

In the history of modern work and the workplace, there is no doubt that 2020 will rank as one of the most significant years in terms of accelerating the pace of change.

“The Business of Brisbane: Responding to the COVID revolution” will look at the new blended workplace and how it will impact on our future workplace planning and development, business centres, public realm and transit behaviour.

Research based, this will be an essential discussion for employers, managers, designers and developers of our business districts.